Fishing is a small minigame used for catching fish ingredients that can be used in cooking. Alongside farming, it is one of the primary ways of acquiring cooking ingredients.

How to fish[edit | edit source] 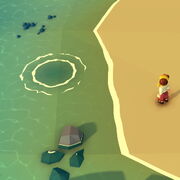 Fishing can only be done at designated spots, which are shown with circular ripples of water along the shore line. The player must be standing a minimum distance away from the spot before fishing, and then use the fishing rod on the spot. After about 10 seconds a fish will bite, and the player must use the interact key (default:

) to begin pulling, and the again for each subsequent pull until the fish is pulled to the player.

When the fish is on the line, there will be two ripples, one static around the bobber and one repeatedly closing in. Pulling will be most effective when these two ripples overlap. Each pull costs energy, so rapid pulls that do not pay attention to these ripples will not pull the fish as far and the fish will require more total energy to catch.

The following fish can be caught:

Where to fish[edit | edit source]

There are three tiers of fish, with three fish per tier. Each fishing spot belongs to a tier (see icon color on the map). The amount of fish per spot is limited. The limit is reset by sleeping or starting a stew. You might sometimes find 1 Intricate Seashell (sometimes even 2 when Brenda's second perk is active) in addition to your fish.

Bluefish, Clam and Mackerel can be found on the sandbank and main island. All spots yield 2 of each fish if fished until empty, except for the one at Fritz's shack, which yields one of each fish.

Tier 2 (golden fish on the map)

Crab, Flounder and White Marlin are found on every of the 3 Islands to the west, southwest and south.

The maximum number of fish to be caught at each spot depends on the island:

Tier 2 fish can also be found on the Central Island: There is a spot next to Fritz's shack which is accessible by either unlocking and building Fritz's pier from the stew rewards, or by using the boat to jump on the nearby rock. After unlocking the Ladder, you will gain access to another tier 2 fishing spot in a cave on the northern half of the main island.

Lobster, Red Snapper and Seabass are found on the northeastern island. Each spot there has each tier 3 fish twice.

After unlocking the climbing rope, you will gain access to one tier 3 fishing spot on the northern half of the main island. It has every tier 3 fish 4 times.

Writhing Tentacle (tentacle on the map)

There are eight spots that yield a single Writhing Tentacle and can only be used once per savegame (doesn't reset when sleeping or starting a stew). Fishing is very difficult there and should only be attempted while under the effects of Fritz's first relationship perk. Fishing all 8 Writhing Tentacles transforms them into a Seamonster Trophy which unlocks the Mariner's Outfit when gifted to Fritz.

On each island (except for the main island), there are two spots each. One is located at a remote little beach only accessible by boat. Those are the beaches where you can find the golden tool upgrades mentioned in the parrot's maps. On the North-Eastern Island, the second tentacle spot is simply the eastern pier at the southern dock area. On the southern island, there is a rock in the south that you can access by boat. The other two islands also have rocks, but they're located in the north-east of each of the two islands.